A House Divided Against Itself

Review by Cindy R. Williams
Today's Book Review is A House Divided Against Itself.
Book Blurb:
It was often said that during the American Civil War, brothers fought against brothers. Mostly they fought on opposite sides but they didn't see each other at the same battle.

This book tells of a rare exception and follows two brothers, one in the 2nd Virginia, Stonewall Brigade, CSA and the other form the 87th Pennsylvania, USA as they fought against each other in two battles in the Shenandoah Valley during1861-1863.

The story is based on over 90 letters from the participants and other members of their regiments, the regimental records, and official records of the conflict

The story is not new, but it has never been told in this manner, starting from their enlistments, and ending back in their home town. It is about Wesley and William Culp, both originally of Gettysburg, Pennsylvania, of their friend, Jack Skelly, and of Jack's girlfriend, Mary Virginia Wade.

It is historical fiction, but it is also mostly true. 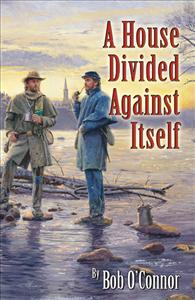 Praise for A House Divided Against Itself.

“Period historians who have read about the Culp family and have knowledge of some of Bob O’Connor’s characters will find this book intriguing and exciting. O’Connor shows us how a family’s inner struggle resembled our national conflict in a very readable fashion.”
James C. Price, Historian Laureate Town of Shepherdstown, West Virginia
The official author bio Writers Mirror was given follows:


Bob O’Connor, a native of Illinois who now lives near Harpers Ferry, WV, has been a life-long student of both the Civil War and Abraham Lincoln. As a 7thgrader he attended the Centennial of the Lincoln Douglas debates at Galesburg, Illinois. One year later he portrayed Lincoln in his school play. Today he is the author of six Civil War era books. His subjects are Abraham Lincoln’s bodyguard, John Brown the abolitionist, the U.S. Colored Troops and brothers fighting against brothers.

O’Connor’s books (two non-fiction and four historical fiction) depict real people and real events. His research has uncovered a never before published drawing of the hanging of John Brown and a complete 500 page unpublished manuscript written by Lincoln’s bodyguard. He has made over 500 appearances in 18 states and the District of Columbia in the last six years to talk about his books.


First off, let me tell you that I am not a Civil War buff. However, people fascinate me, family dynamics are intriguing and this story is chalk full of interesting people making their way in life doing the best that they can. O'Connor does a great job getting into the four main characters heads.  He tells a story of what it was like to live through one of the most difficult times and situations a family could face.  I

It is evident that O'Connor has done his research. This book taught me more about the Civil War than any of my AP Honors American Heritage classes did in three years. O'Connor knows his stuff. He makes history fascinating. Too bad this book isn't recommended reading for students.
Free Preview available at Amazon


A House Divided Against Itself is published by Infinity Publishing.
For more information on Virtual book tours: www.walkerauthortours.com
Posted by Cindy R. Williams