The following quotes can be tweaked to fit most areas, but please read them with your writing in mind.

"Procrastination is like a credit card; it's a lot of fun until you get the bill." Christopher Parker

"Quality is not an act. It is a habit." Arisotle

"Whatever you are, be a good one." Abraham Lincoln

"Tomorrow is a mystery. Today is a gift. That is why it is called the present." Eleanor Roosevelt

"You don't get harmony when everyone sings the same note." Doug Floyd

These last three resonate with me big time. How about you?

"Life is either a daring adventure or nothing." Hellen Keller

If you find one or two of these that fit where you are right now, please print them and place them on your mirror or somewhere to remind you that you CAN DO IT!

All That Was Promised by Vickie Hall

I must say that the front cover fascinates me. Most of it is in browns and greens, not really too catchy, however, it has an embossed design placed on top of the colors that make it quite unique. It made me want to take a second look.

The back blurb is:

AN ENCOUNTER WITH a Mormon Missionary and his unusual message of a "restored gospel" leaves Richard Kenyon, a young Methodist minister, questioning his life's work when he cannot deny a growing testimony of this peculiar American religion. But Richard soon finds himself struggling to recognize the promised blessings of the gospel when violent persecution shakes the fledgling Church in Wales.

I have ancestors from Wales, so that caught my interest. Also, I find it intriguing that a minister of another church, someone we assume knows religion, begins to understand and feel the spirit of truth. I want to know about this journey and if he is strong enough to follow the light.

It is said that a great first line leads to a great book. This may or may not be true, however, first lines of books do tell one allot about what to expect. The first line of the book told us the name of one of the important characters and that she was proud of her husband. Though not explosive, we have good information and I like her. The first chapter reveals a number of key players. We learn that the minister and his wife are good people--people you want to call friends. We also meet uppity characters like the minister's brother and his wife. Hall does well on creating characters we love, or love to hate.

Hall gives the reader an education in early trials of the Church in Wales. We usually hear about the Pioneers and how they were persecuted. Hall opens your eyes by creating a story that will touch your heart and increase your love and appreciation for those stalwart members all around the world.

Writers Mirror gives All That Was Promised by Vickie Hall 8 smiles on a scale of 1 - 10.  Well worth the read.

All That Was Promised is Vickie Hall's debut novel and is published by Bonneville Books, a Cedar Fort imprint.

All That Was Promised by Vickie Hall
Posted by Cindy R. Williams 4 comments:

Labels: All That Was Promised by Vickie Hall, Cindy R. Williams 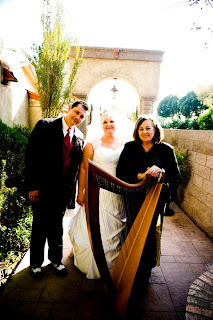 Two of my favorite people, Tony and Joanni Judd, on their wedding day.
This is my magical harp, Arvilla. Did you know if you are the first owner of a harp, you have the privilege and responsibility of christening it with it's eternal name? Arvilla is the middle name of my favorite, and only dear mother. The name reminds me of vanilla, a yummy taste and a sublime smell. My mother doesn't like the name so much so it's fun to tease her a bit by using the name - not that I ever yanked her chain growing up or anything.
Playing the harp channels my muse and also calms my soul. I often play late at night in the dark. It's not like playing a trumpet so I don't wake anyone. If they do happen to stumble out of bed, they think they are hearing angels so it's all good.

I have found that writing harp music is pretty much the same process as writing stories. Sometimes the notes flow out and they sound wonderful, but other times, nothing comes. Nada, stone-cold dry. When that happens, I play whatever my heart desires and enjoy the lilting music that floats around the lofty ceiling. When nonsense or no sense comes out of my fingertips on the keyboard of my computer, I often dive into the pool and float on my back make cloud animals.
Just yesterday there were dragons swooping in and out of thunder clouds along with some slashes of lighting giving me two good reasons to slosh out the pool. The first and most important was to quickly jot down the dragon scene before it slipped away and the second reason was to avoid getting zapped by lightning. Maybe not in the correct order, but both important none the less.
The muse is a tricky little minx at best. I think I will try enticicing the muse with chocolate. Has this worked for anyone? What works for you?
Posted by Cindy R. Williams 2 comments: