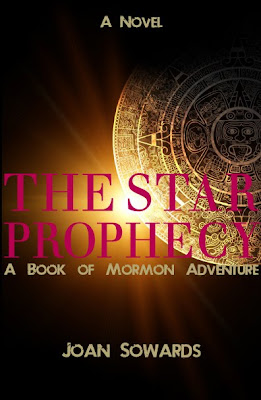 We will be giving away THREE copies of The Star
Prophecy.It's easy to enter.
1. Visit the fabulous reviews and leave a comment letting us know why
you're excited to read The Star
Prophecy. Remember to include your email address.
2. If you tweet about the blog tour, or post about it on your blog or
facebook, leave the link in the comments section and you'll receive an
additional entry.

The Star Prophecy Book Blurb
Most people laugh when they hear of Enoch's dream of returning to Jerusalem to find the infant Messiah. Even Enoch's future father-in-law mocks him when he asks for a postponement of his long-awaited wedding to his beloved Rebekah. A few take Enoch seriously - the shipbuilder Omnihah, Enoch's teacher David, and the prophet Nephi.

Five years before, a Lamanite named Samuel had stood on the wall of Zarahemla and prophesied that "five years more cometh" and the Christ would be born in Jerusalem. Time is running out! Enoch knows he must set sail across the great waters in search of his dream - to see the face of the Messiah.

The Star Prophecy is a surprising story of courage and love, faith and fortitude. Sail with Enoch and his
friends across the sea through hardship and adventure in search of the Christ child.

The Star Prophecy Book Review
by Cindy R. Williams﻿
A new favorite book by Joan Sowards. The first time I held the book in my hands, I got a little tingly all over. The name and the front cover alone looked to be a great escapade.

Intriguing premise. To become acquainted with people in the Book of Mormon times. To see their everyday way of living, thinking, acting and overall culture through the author's eyes was captivating. Sowards gets under the skin of her characters. She shows a good story rather than tells it.

Enoch was a strong character built around integrity. Yet he was given human frailties making him real. My heart went out to his little brother. I wanted to wrap my arms around him and do some major mother nurturing. Kumeni reminds me of many a teenager, a few of my own included. He has to experience things in his own way and learn from the school of hard knocks. I warmed up to him from the get go.

The Star Prophecy is rich in character, story line and adventure. I highly recommend it.