No Holly For Christmas by Julie N. Ford

Here is the blogging info received for a new release titled "No Holly for Christmas." 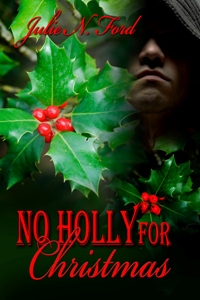 No Holly for Christmas is a women’s fiction/romance with elements of suspense.
It’s the second novel by fiction author Julie N. Ford, a talented new writer who had three novels released in 2011, including No Holly for Christmas and the Whitney Award nominated, Count Down to Love. Visit her website at JulieNFord.com.
Synopsis:No Holly for Christmas
Widowed, practically penniless, and reduced to shopping at WalMart, Holly is dreading the approaching Holiday Season. However, her angst isn’t due to her husband’s untimely death the previous December 25th, but because of a secret that could reveal itself unless she can find a way to avoid the coming Christmas.
As Brian McAlister struggles to move past being jilted not once, but twice by the only woman he’s ever loved, he’s all but given up on relationships. Then, on special assignment for the DA’s office, he crosses paths with ex-socialite turned social worker, Holly Cavanaugh Winter—and romance blossoms.
Love at first sight quickly turns frigid for ADA, Brian McAlister, and social worker, Holly Winter, when Holly gets pulled into a manhunt for an accused murderer who now has his sights set on her. His case unraveling, Brian finds himself tasked with keeping Holly and her two daughters safe while bringing an assassin and the powerful man who hired him to justice.
A heart-warming story of suspense, healing, giving and receiving, No Holly for Christmas is the perfect addition to everyone’s holiday reading list.
There is a book bash and give-away. Send email to: bloggers@vbooktours.com
A few comments about "No Holly for Christmas" from Writers Mirror."

Bridget, Holly's little girl, was particularly adorable. She jumped off the page with her endearing banter.

Although Holly began as quite a snob, her character arch brought her the understanding of what is really important in life. Brian, the other protagonist, seemed like quite a hunk, although his views of life in general were on a different plane.

There were a few uncomfortable swings taken at conservative Bible believing people for not accepting the morality views of world. A character with an alternate life style voiced her opinion that her sister, with higher standards than the general populous, was self-righteous.


Ms. Ford takes the reader on a journey where characters do some serious soul searching in order to make a better life for themselves and those around them.
Posted by Cindy R. Williams