The Assassination of Governor Boggs by Rod Miller

The title alone caught my attention. It tweaks the interest of history buffs and members of the LDS Church. Everything known about Governor Lilburn Boggs speaks of controversy. Often referred to by early members of the Church as one of the most evil men and a definite thorn in the side of Mormons, Boggs was directly and/or indirectly responsible for the deaths of many early Saints; men, women and children.
Boggs is most famous for his extermination order of the Mormons on October 27, 1838, during the time he served as Governor of Missouri.

Author Rod Miller creates a novel based around Mr. Progue, a Pinkerton Detective, hired by the Bill Boggs, the son of Governor Boggs.  Progue was hired to find out the truth whether Orrin Porter Rockwell, the notorious body guard of the Prophet Joseph Smith, and later, President Brigham Young was guilty of the assassination attempt. Note, Governor Boggs did not die from the gun shot through his parlor window, although three balls entered his head and one his throat. He lived another 18 or so years, most of them in California after his term as Governor ended.

Miller sets the story about 25 years after the assassination attempt. It is told through Progue as he travels around the country interviewing eye anyone who he can find that was either around during that time or reading old reports, newspaper clippings and records. Progue also interviews Orrin Porter Rockwell himself, and various parts of that interview are interspersed throughout the book.

Miller does an excellent job of taking the reader on a tour of the hardships the Saints suffered at the hands of Bogg from the eyes of the neutral character, Progue. He includes a visit with "Wild Bill", Emma Smith Bidamon and even President Brigham Young. 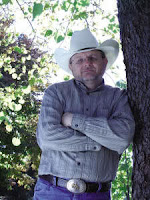 Miller, "Born and raised in a small town in Utah, around horses and cattle, and a veteran of the rodeo arena, he comes by his love of the West and its history, culture, and people honestly."This is explains the feeling of reality conveyed in the book about the life on the frontier in the 1800's. Miller has a knack for making the wild west come alive.

Did Orrin Porter Rockwell shoot Governor Lilburn Boggs? That is the premise of the entire novel as you journey through the history.

It is a good read, and you will have to make up your own mind as to what really happened after you travel the dusty trails with a Pinkerton Detective.

Writers Mirror gives The Assassination of Governor Boggs by Rod Miller 9 stars out of 10. A book defiantly worth reading.

Check out more about Rod Miller and his books at: www.writerrodmiller.com

To purchase your own copy, Click Here
Posted by Cindy R. Williams