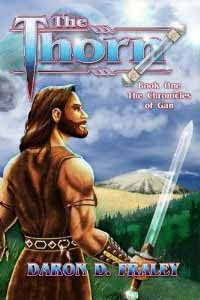 "The Thorn" by Daron D. Fraley is a new release by Valor Publishing Group, LLC. Writers Mirror has been invited to participate in the book blog review tour. Let's start with the captivating blurb on the back.

Three tribes are at war on the planet Gan, unaware that the sign of Christ's birth on an unknown word--Earth--is about to appear in the heavens.

During a bloody skirmish with Gideonite troops, Jonathan of Daniel spares Pekah, a young enemy soldier, gaining his trust forever. These two distant brothers from estranged tribes covenant with each other to end the war being waged by a self-proclaimed emperor, and soon discover the intentions of a far more dangerous foe--a sinister general bent on ruling those he can bring into subjection and destroying all others.

I must admit my curiosity was piqued by this mixture of history and religious beliefs being tied together and viewed through the eyes of people living on another planet. I'm not a big fan of war books and movies, but started reading with hopes of a good tale. I was not disappointed. Fraley weaves an interesting story of three very different groups of people dealing with intrigue, power, murder, romance, obedience, faith, trust and forgiveness.

The names of the characters were excellent and in keeping with the story. Battle strategies were mapped out with finesse. Fraley seems to know how to stage a war. The weapons he described lent themselves well to the story. The Thorn was quite unusual, and an interesting object in itself. The sword Jonathan used was particularly fascinating. Stones that glowed with light when rubbed were another good creative touch.

The two sister suns, Aqua and Azure, were mentioned by name often throughout the book which leads one to believe they play some significant part yet to be revealed. Sniffling and teary eyes by grown men and hardened soldiers gave me pause now and then.

Spoiler Alert: The anointing of the King and the two marriages were lumped together in one event which seemed a little anti-climactic and a bit rushed since each event was a big deal.

Included in the book is a preview of chapter one of the next book which contains a disturbing hook. As an advocate for the sanctity of one's person, and particularly my daughters, I was upset to leave the new situation unresolved, but isn't that what a good hook does? I'll have to read book two and hope there is some kind of justice.

Fraley takes us on a journey back in time and gives a good look into what might have been in a universe far away. He certainly makes the possibility come alive in his novel.