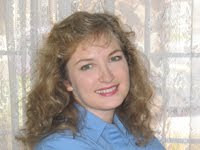 Donna has had a passion for writing since the age of 8 when she wrote her first short story. In between caring for six children, (7 counting her husband) she manages to carve out time to indulge in her writing obsession, with varying degrees of success, although she writes most often late at night instead of sleeping. A native of Arizona, she now writes Regency Romance and Fantasy. And yes, all of her heroes are patterned after her husband of over 20 years.

CRW:  Thanks for being with us here on Writers Mirror today as our Wednesdy Writer Donna. What inspires you to write?

Donna:  Anything might. A story I read that I wish had gone a different direction. Wondering about a secondary character in a book or movie. A song. Sometimes I just get a scene in my head, like watching a scene in a movie, and I build the rest of the story around it.

CRW:  Do you try to write daily, and if so, do you set a goal of a certain number of words?

Donna:  Word count doesn't work for me because sometimes I need time to chose just the right word or phrase. Instead, I try to write for at least two hours daily. It used to be longer, but now that I'm juggling three part time jobs, plus being a mommy, it's cut into my writing time. I write more when I'm suffering from insomnia.

CRW:  In a nutshell, what gets in your way of writing?

Donna:  Usually because I can't NOT write. Or sometimes I just make myself sit down and write something. Anything. Even if I'm sure I'll cut it later. Some of the biggest bursts of brilliance have occurred when I was sure I was writing utter trash, which most of it was, but there was often a jewel in there that I salvaged which changed the course of the story or the basic element of a character.

CRW:  Intersting.  What makes you CRAZY about writing?

Donna:  Self doubt. My interal editor. Critique partners, sometimes, when they don't "get" what I'm writing.

CRW:  How long does it take you to complete a book?

Donna:  I can usually write the first draft anywhere from 3 weeks to 2 months. But I spend 4 months or more polishing it depending on how many interruptions I have. Novellas go much faster. I wrote both of my novellas in just a few days.

CRW:  Where do you get your character’s names?

Donna:  Nothing clever. Sometimes they come pre-named. Other times I rename them several times until I get just the right one. The character doesn't become 3 dimentional until I chose the right one. I stick to names that were used in Regency England or that were Norman Conquest names to help create that believable Regency feel.

CRW:  What is your favorite writing food?

Donna:  I don't eat while I write unless my stomach wakes me up out of my writing coma. And then I'm so starved that I want whatever I can get my hands on fastest.

CRW:  I love that you get into a "Writing Coma"  or zone. Okay Donna, here's the million dollar quesion.  Why are you a writer?

Donna:  I am. Therefore I write. It certainly isn't for the glory or the money, since obviously I have neither of those.

CRW:  Keep it up, you will!  Who do you hope reads your work?

CRW:  What would be the best compliment you could receive from one of your readers?

CRW:  Please tell us about your book you are now promoting. You know, kind of your elevator pitch.

Donna:  Alicia must marry a terrifying man to save her family from ruin. But little does she know, a killer is stalking her family. Is the handsome lord tempting her to leave her husband merely a harmless flirtation...or something much more dangerous?.

CRW:  I'm hooked.  Please tell us more about your books.  I understand that your book, "The Stranger She Married is a Golden Quill Finalist.  Congratulations!

Donna:  Thank you.  It is book 1of the Rogue Hearts Series.
When her parents and only brother die within weeks of each other, Alicia and her younger sister are left in the hands of an uncle who has brought them all to financial and social ruin. Desperate to save her family from debtor's prison, Alicia vows to marry the first wealthy man to propose. She meets the dashing Lord Amesbury, and her heart whispers that this is the man she is destined to love, but his tainted past may forever stand in their way. Her choices in potential husbands narrow to either a scarred cripple with the heart of a poet, or a handsome rake with a deadly secret.
Cole Amesbury is tormented by his own ghosts, and believes he is beyond redemption, yet he cannot deny his attraction for the girl whose genuine goodness touches the heart he'd thought long dead. He fears the scars in his soul cut so deeply that he may never be able to offer Alicia a love that is true.
After yet another bizarre mishap threatens her life, Alicia suspects the seemingly unrelated accidents that have plagued her loved ones are actually a killer's attempt to exterminate every member of her family. Despite the threat looming over her, learning to love the stranger she married may pose the greatest danger to her heart.

The next is Book 2 in the Rogue Hearts Series; "The Guise of a Gentleman." It's about a secret agent who must impersonate a pirate in order to expose a pirate ring. But the stakes raise when the woman he loves is dragged into his dangerous world of espionage and piracy. This book will be out April of 2010.
"Combining Jane Austen with swashbuckling adventure, The Guise of a Gentleman is a fine specimen of pirate romance!" USA Today bestselling author Jennifer Ashley
The widowed Elise is a perfect English lady living within the confines of society for the sake of her impressionable young son. Her quiet world is shattered when she meets the impulsive and scandalous Jared Amesbury. His roguish charm awakens her yearning for freedom and adventure. But his irrepressible grin and sea-green eyes hide a secret.
A gentleman by day, a pirate by night, Jared accepts one last assignment before he can be truly free. Elise gives him hope that he, too, can find love and belonging. His hopes are crushed when his best laid plans go awry and Elise is dragged into his world of violence and deceit.She may not survive the revelation of Jared’s past…or still love him when the truth is revealed.

"Troubled Hearts" is a short novella.  Desperate to escape her estranged husband and a home enshrouded with death and despair, Julia flees in the middle of the night. Little does she know, her determined husband is in pursuit. Along the journey, she discovers a telling revelation. But will it be enough to banish the ghosts of the past and quiet her troubled heart?

CRW:  Where can our readers go to buy your book(s)?

Donna:  At Barnes & Noble (they'll order it for you if they don't currently have it in stock.)  Also, Amazon.com, or my publisher, The Wild Rose Press http://www.thewildrosepress.com/historical-historical-nonamerican-c-176_138.html?alpha_filter_id=0&filter_id=258&sort=7a&zenid=bacc7a0e2c5c1f13dd557deb8b0b7211

CRW:  Donna you have this tag on your email, "Believe in happy endings…"  Your books fit this so well. Thanks for sharing with us today on Writers Wednesday at Writers Mirror.

To read more about Donna Hatch click onto her sites.