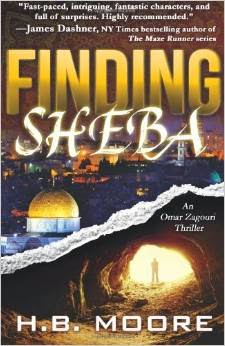 AN ANCIENT LEGEND IS REBORN . . . ONE THAT MIGHT PROVE THE BIBLE FALSE.

For centuries, historians have theorized the Queen of Sheba as only a seductive legend, and scholars have debated over the legitimacy of the King of David or King Solomon. When undercover Israeli agent, Omar Zagouri, stumblers onto a tomb in Northern Jerusalem he unknowingly finds the final clue that threatens to overthrow government claims to the Holy Land, pits wealthy collectors against one another, and sends ruthless archaeologists scrambling to find the queen's secret burial place.

An assassination attempt on the Coptic Pope, His Holiness, Patriarch Stephanus II, is only the first in the chain of lethal cremes. Omar must find a way to prevent the greatest discovery of the century from becoming the most deadly.

H.B. Moore is the pen name for the award winning author, Heather B. Moore. She is the author of ten historical novels which are set in Ancient Arabia and Mesoamerica. She is the author of two non-fiction books and several women's novel --these are written under her real so that women will buy her books. She says using different names can be confusing so her kids just call her Mom.
Posted by Cindy R. Williams